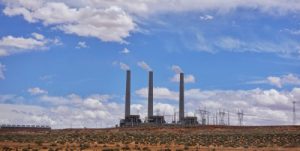 “The Navajo Nation has been among the hardest-hit communities by the coronavirus,” Sen. McSally said. “In the midst of a pandemic, the lack of adequate infrastructure on Navajo Nation, including access to electricity, has only exacerbated this crisis.”

Sen. McSally signed on as the lead original cosponsor of the untitled S. 4498 with bill sponsor U.S. Sen. Martin Heinrich (D-NM) to authorize $89 million in 2020 funding for the Navajo Electrification Demonstration Program to fund the Navajo Tribal Utility Authority (NTUA), which implements projects that bring electricity to Navajo households.

According to the NTUA, roughly 15,000 Navajo families currently do not have electric power. Under S. 4498, an additional 2,100 Navajo households would receive power using power-line extensions or standalone renewable wind and solar power systems in Arizona, New Mexico, and Utah, according to a bill summary provided by Sen. McSally’s office.

“Our legislation will bring desperately-needed relief to these struggling families by empowering the NTUA to bring electricity to Navajo households,” said Sen. McSally.

The Navajo Nation endorsed S. 4498, which has been referred for consideration to the U.S. Senate Indian Affairs Committee.

“We thank Senators Heinrich and McSally for their leadership in introducing a bill that moves the needle on fulfilling the promise to bring infrastructure to Indian Country,” said Navajo Nation President Jonathan Nez. “During the ongoing pandemic, we appreciate every effort to bring relief to struggling families.”