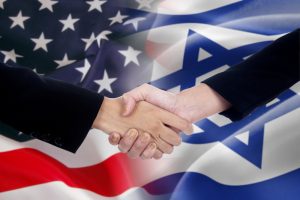 U.S. Reps. Brian Fitzpatrick (R-PA) and Josh Gottheimer (D-NJ), the most bipartisan freshman legislators in Congress, reiterated the nation’s support for the State of Israel and America’s ongoing commitment to protect its ally from regional terrorist threats during an Aug. 15 roundtable discussion on U.S.-Israel relations held at the Lower Bucks Chamber of Commerce in Fairless Hills, Pa.

“Israel and the United States share a special relationship, cultivated and reaffirmed in word and action,” Rep. Fitzpatrick said. “Our dialogue regarding U.S.-Israel foreign policy was both constructive and informative.”

The federal lawmakers were joined by Ambassador Dani Dayan, Consul General of Israel in New York, as well as Bucks County (PA) Jewish faith leaders. Rep. Fitzpatrick said that Ambassador Dayan gave “an insightful update” regarding threats along the Gaza strip by the terrorist group Hamas.

Despite an Aug. 1 unconditional ceasefire, Hamas militants in Gaza have fired 200 rockets into southern Israel since Aug. 8, according to a statement from Rep. Fitzpatrick’s office. Israeli citizens have been advised to stay in bomb shelters, and many are being treated for trauma. Several rockets also have been directed against U.S. partner regions, Netivot and Sedot Negev, according to the statement.

Ambassador Dayan discussed the need for a comprehensive solution for peace in these areas.

“As one of our closest partners, Israel will always have our unwavering support,” Rep. Fitzpatrick said. “Together we will continue to strengthen our relationship and promote peace and stability throughout the region.”

Rep. Gottheimer noted that the U.S.-Israel partnership “is also critical to America’s own strategic interests, from advancing stability in the Middle East to confronting shared threats, including a nuclear-armed Iran and foreign terrorist organizations like Hamas and Hezbollah.”

Toward strengthening the countries’ bond, the congressman said he looks forward to continuing bipartisan work with Rep. Fitzpatrick and members of Congress to support strategies such as bilateral missile defense cooperation, divestment, and sanctions that would help preserve Israel’s military edge in the region.

Both Rep. Fitzpatrick and Rep. Gottheimer also this month announced recognition as being among the most bipartisan lawmakers in Congress, according to a new, non-partisan ranking from The Lugar Center, a Washington, D.C.-based policy group.

Rep. Fitzpatrick is ranked as the most bipartisan freshman legislator, the third most bipartisan member of the U.S. House of Representatives, and fifth in Congress for the first session of the 115th Congress, according to 2017 data in the Bipartisan Index released by The Lugar Center.

“I understand there are differences between Democrats and Republicans,” Rep. Fitzpatrick said in an Aug. 8 statement, “but on the issues where there is common ground, we must move forward together.”

One of those issues is U.S.-Israeli relations, according to the congressman, who in July condemned the continued Hamas attacks on Israel, as well as those targeted at the city of Netivot and the Sdot Negev region, which have a partnership with the Jewish Federation of Greater Philadelphia.

“Hamas terrorists continue launching indiscriminate attacks on Israeli citizens, intentionally targeting women and children, in synagogues and kindergartens,” said Rep. Fitzpatrick on July 16. “These incendiary attacks against Israel are morally reprehensible and must come to an immediate end.”

“When our friends come under attack, we must not be silent,” he added.