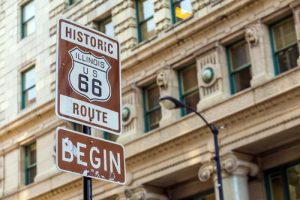 Established 95 years ago as part of the nation’s original highway system and stretching across several states from Illinois to California, the 2,448-mile U.S. Route 66 should be designated as a National Historic Trail, according to U.S. Rep. Darin LaHood (R-IL).

Toward that goal, the congressman on May 28 sponsored H.R. 3600 with cosponsor U.S. Rep. Grace Napolitano (D-CA).

“Route 66 is a crucial transportation artery that connects America’s heartland to the West,” said Rep. LaHood. “Designating Route 66 as a National Historic Trail would provide this highway with a permanent program to preserve, promote and economically develop it.”

“National Historic Trail designation would deliver much-needed federal dollars, resources and jobs to our San Gabriel Valley communities and the countless others across the eight states which proudly claim a portion of Route 66,” added Rep. Napolitano. “Providing critical funds to be used in close coordination with cities and stakeholders, our legislation will help rehabilitate, improve and preserve the legacy of the iconic road, benefiting millions of residents and boosting our economic recovery.”

In September 2020, Reps. LaHood and Napolitano first introduced similar legislation, the Route 66 National Historic Trail Designation Act, H.R. 8240, which would have amended the National Trails System Act to designate a trail of approximately 2,400 miles extending from Chicago to Santa Monica, Calif., as the Route 66 National Historic Trail. However, the bill stalled in the U.S. House Natural Resources Subcommittee on National Parks, Forests, and Public Lands.

“As we kick off the summer months and Americans begin to travel again, I am proud to once again partner with Rep. Napolitano to designate Route 66 a National Historic Trail and give it the appropriate designation it deserves,” said Rep. LaHood.

The Route 66 Road Ahead Partnership and the National Trust for Historic Preservation support enactment of the newly introduced H.R. 3600.