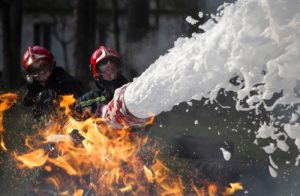 “Firefighters and first responders put their lives on the line to keep communities safe, and they should not have to worry about being exposed to harmful chemicals like PFAS when called to emergencies,” said Sen. Tillis. “This legislation will develop guidelines to keep our first responders safe and limit the introduction of these harmful contaminants into the environment.”

If enacted, the bill would direct the administrator of the Federal Emergency Management Agency (FEMA) to develop guidance for firefighters and other emergency response personnel on best practices to protect them from exposure to PFAS and to limit and prevent the release of PFAS into the environment, according to the congressional record bill summary.

Additionally, S. 231 would require that guidance be issued on alternative foams and personal protective equipment that do not contain PFAS, according to Sen. Tillis’ office.

The measure has been referred for consideration to the U.S. Senate Homeland Security and Governmental Affairs Committee.