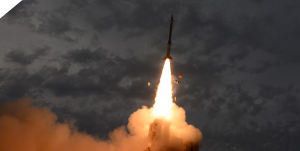 Contained within the new fiscal year (FY) 2018 appropriations package, which funds the government through Sept. 30, is $705.8 million for missile defense systems such as Iron Dome, David’s Sling, Arrow and Arrow 3.

“U.S.-Israel missile defense cooperation is a critical investment in the safety and security of Israel and stability in the Middle East,” said Rep. Roskam, co-chair of the House Republican Israel Caucus.

The congressman thanked U.S. Rep. Grace Meng (D-NY) for “her consistent effort on this important issue” and said he looks “forward to continue working with her to secure sustained support for these programs in FY 2019.”

In fact, the two lawmakers sent a March 19 bipartisan letter to budget leaders in the U.S. House Appropriations Subcommittee on Defense seeking at least $500 million, the amount requested in the President’s FY 2019 Missile Defense Administration budget, for the U.S.-Israel missile defense programs. “In sum,” they wrote, “as we see our enemies more emboldened and their capabilities growing, joint U.S.-Israel security cooperation is needed now more than ever.”

Last year, Reps. Roskam and Meng teamed up on a similar request. In an Apr. 3, 2017 bipartisan letter to appropriations leaders in the U.S. House of Representatives, they requested a total of $600.8 million for the U.S.-Israel missile defense programs, the same amount appropriated for FY 2017. The funding was needed, they wrote, to help Israel protect against enemies with enhanced capabilities and to address the growing threat of long-range missiles. But they also forewarned about encroaching issues that are currently taking place.

“These programs also yield a tremendous return-on-investment for the United States in the form of economic, technological, and military benefits,” the lawmakers wrote last year. “Beyond the Middle East, we are facing a newly emboldened, aggressive, and increasingly militarized Russia, heightening the need for advanced missile defense system to protect our European allies and forward-based forces.”

Rep. Roskam pointed out on March 28 that the cooperation between the countries “improves Israel’s ability to defend its citizens and the U.S. Army’s recent tests of Iron Dome is a clear indication that our own forces can benefit from this battle-proven technology.”

Rep. Meng, a member of the U.S. House Appropriations Subcommittee on State and Foreign Operations, also said she looks forward “to continued and strong funding for U.S.-Israel missile defense cooperation in FY 2019.”

“I’m proud to have worked with my friend Rep. Roskam to secure robust funding for U.S.-Israel missile defense cooperation, which is a critical pillar to realizing a safe and secure Israel,” she added.