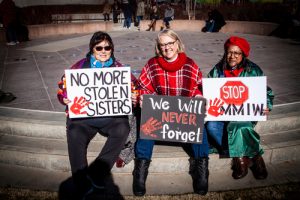 U.S. Rep. Dan Newhouse (R-WA) recently made a bipartisan call for a federal update on the implementation of Savanna’s Act, which became law last year to address the disproportionately high number of missing or murdered Native American women.

“Savanna’s Act was signed into law over a year ago and requires the Department of Justice to update Congress on how the reforms and guidelines are being implemented to better protect native women and communities,” Rep. Newhouse said. “I am deeply disappointed this statutory deadline has not been met, given the dire state of the crisis of missing and murdered indigenous women in central Washington and across the country.”

“Federal statistics show that Native American women are murdered at rates more than 10 times the national average and yet are the least likely of all ethnic groups to have newspaper coverage,” the lawmakers wrote. “Native Americans, women of color, and their families deserve the primetime coverage and government and public response that other cases have received.”

Rep. Newhouse and his colleague pointed out that while they understand that the change in executive administration and agency leadership has adversely impacted the AG’s ability to meet the deadlines set forth in the law, communities across the nation cannot wait any longer for assistance.

“You play a pivotal role in the national effort to find justice for these women, and we urge you to provide Congress with an update on your efforts to implement Savanna’s Act,” wrote the lawmakers. “We are requesting complete transparency in the implementation process of this legislation, which calls for a report from the department detailing the annual data on missing Native Americans and the law enforcement agencies that provide such data.”