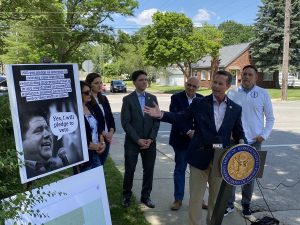 “The governor’s decision to approve partisan state legislative redistricting maps created by Illinois Democrats to preserve their political power is a slap in the face to every Illinoisan and good governance everywhere,” Rep. LaHood said on June 4. “With his signature…, Governor Pritzker has shown Illinoisans that their priorities fall behind his personal interests.”

In 2018, the governor told Capitol Fax that he would pledge to veto such maps and urged Democrats and Republicans to agree to an independent commission to handle creating a new legislative map. “That designated body should reflect the gender, racial, and geographic diversity of the state and look to preserve the Voting Rights Act decisions to ensure racial and language minorities are fully represented in the electoral process,” Pritzker said at the time.

LaHood said that Gov. Pritzker also made it clear as a candidate that he supported an independent redistricting process and that he would veto any state legislative redistricting map proposal that was drafted or created by legislators, political party leaders, or their staffs or allies.

“Governor Pritzker broke his promise to Illinoisans and our state will suffer because of his failed leadership,” said Rep. LaHood.

Rep. Davis, who held a two-day, four-stop tour on June 4 with state lawmakers, also voiced concern about the governor’s action.

“[Gov. Pritzker] can veto the maps that were put in front of him like he pledged to do, or he’s going to accept them,” said Rep. Davis. “That’s his choice to either keep his promise or break his promise.”

Rep. Davis, who last week held four press conferences across his 13th Congressional District that would be divided between state lawmakers under the new maps, said he also supports change at the federal level and thinks maps for congressional districts should be drawn through an independent process.