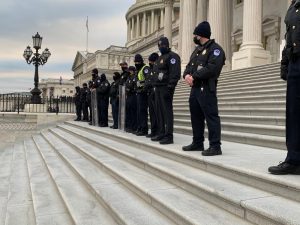 Following a mob’s insurrection at the U.S. Capitol on Jan. 6, U.S. Rep. French Hill (R-AR) this week introduced a bipartisan resolution honoring police officers for their defense of federal lawmakers, civilians and the Capitol building.

“As we recover from the January 6th attack on the U.S. Capitol, I am humbled and honored to recognize, along with my colleague, Congressman Perlmutter, our deep admiration and gratitude to heroic actions of the men and women of the United States Capitol Police and to remember the two officers lost, Officer Sicknick and Officer Liebengood,” said Rep. Hill.

During a Jan. 6 joint session of Congress, an attack occurred on the Capitol, threatening the physical well-being of the vice president, members of the U.S. House of Representatives and the U.S. Senate, along with hundreds of civilians located within and on the grounds of the Capitol Complex and the security of the Capitol building itself, according to H.Res. 39.

Capitol Police officers and other law enforcement officers directly engaged with the attackers, who were armed with explosives, metal pipes, chemical irritants, and other weapons. Officer Sicknick sustained fatal injuries during the attack. Officer Liebengood died while off-duty after the attacks, according to the resolution, which noted that more than 50 police officers in total sustained injuries.

“I extend my sincere condolences to the families of Officer Sicknick and Officer Liebengood and am proud to recognize the selfless dedication and service that the men and women of the United States Capitol Police alongside all other involved local law enforcement agencies displayed on that day as they do every day,” Rep. Hill said.

If enacted, H.Res. 39 would commend “the examples of bravery and service-above-self” demonstrated by the officers and honor the example of service and devotion to duty displayed by Officers Sicknick and Liebengood.

The resolution, which has garnered 50 cosponsors, has been referred for consideration to both the U.S. House Administration Committee and the U.S. House Judiciary Committee.