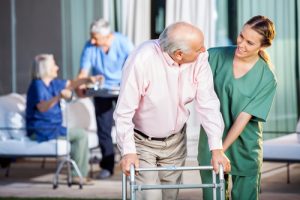 U.S. Rep. Sean Duffy (R-WI), chairman of the U.S. House Financial Services Subcommittee on Housing and Insurance, introduced a bill that would improve nursing care for seniors by allowing nursing homes to train new qualified nurses while also ensuring that deficient facilities comply with the law.

“I’m proud to introduce legislation to eliminate another layer of Washington red tape that prevents Wisconsin seniors from receiving the highest quality of care from well-trained medical professionals,” said Rep. Duffy on Sept. 28 when he introduced the legislation.

The Nursing Home Workforce Quality Act, H.R. 6986, would amend the Social Security Act regarding nursing facility requirements for skilled workers. It would permit a state, in consultation with the federal government, to deny a nurse aide training and competency evaluation program or a nurse aide competency evaluation program offered by a skilled nursing facility (SNF) if the facility has received a civil monetary penalty of not less than $10,483 for providing substandard quality of care; and has not corrected such deficiencies, according to the text of the bill in the congressional record.

A disapproval may be rescinded when an SNF demonstrates that all deficiencies for which it was imposed a civil monetary penalty have been remedied, according to the bill.

If enacted, H.R. 6986 would change the mandatory Certified Nurse Assistant (CNA) training lockout for SNFs that are imposed by the Centers for Medicare and Medicaid Services (CMS), according to a summary provided by the congressman’s office. Instead, the proposal would permit the secretary of the U.S. Department of Health and Human Services to impose a lockout based on a substandard quality of care.

The current CMS-enforced mandatory CNA training lockout for penalized SNFs “is counterintuitive because it limits a SNFs ability to train new qualified staff, which can perpetuate a substandard quality of care if facilities are not able to recruit qualified nurses,” according to the lawmaker’s statement.

Nursing homes that comply with federal law shouldn’t be forced to sacrifice quality staff because of arbitrary lockouts, according to the statement.

H.R. 6986 has been referred to both the U.S. House Ways and Means Committee and the House Energy and Commerce Committee for consideration.