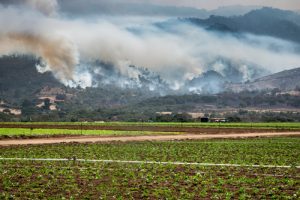 U.S. Rep. Dan Newhouse (R-WA) on Jan. 11 reintroduced bipartisan legislation that would expand the U.S. Department of Agriculture’s Wildfire and Hurricane Indemnity Program Plus (WHIP+) to include coverage for crops lost due to wildfires occurring in calendar year 2020.

Under current law, WHIP+ provides disaster payments to agricultural producers who suffered crop, tree, bush, and vine losses resulting from hurricanes, wildfires and other qualifying natural disasters that occurred in the 2018 and 2019 calendar years, according to the congressional record bill summary.

WHIP+ offers critical assistance to agricultural producers, including winegrape growers, whose crops were impacted by smoke taint. “Winegrape growers in central Washington are all too familiar with the damage that wildfires and smoke can have on the industry each year,” said Rep. Newhouse.

Rep. Newhouse is an original cosponsor of the 2020 WHIP+ Reauthorization Act, H.R. 267, with bill sponsor U.S. Rep. Mike Thompson (D-CA). The congressmen, who are co-chairmen of the Congressional Wine Caucus, originally introduced the same-named H.R. 8790 in November 2020. However, the legislation expired at the end of the 116th Congress.

“WHIP+ is a necessary resource for many producers as they continue to recover from last year’s devastating wildfires in our region,” Rep. Newhouse said. “I am pleased to reintroduce this legislation and encourage my colleagues to support this important program that will provide much-needed assistance to central Washington’s high-quality wine industry for years to come.”

H.R. 267 has been referred for consideration to the U.S. House Agriculture Committee.