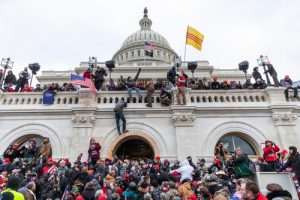 U.S. Rep. Tom Reed (R-NY) recently proposed a bipartisan bill that would establish the National Commission on Domestic Terrorism to further investigate both the Jan. 6 insurrection at the U.S. Capitol and the federal government’s ongoing failure to more broadly respond to domestic terrorism.

Rep. Reed on Feb. 18 signed on as an original cosponsor of the Commission on Domestic Terrorism Act of 2021, H.R. 1178, with bill sponsor U.S. Rep. Jackie Speier (D-CA) to create an independent, bipartisan commission modeled after the 9/11 Commission that would investigate and make recommendations ensuring the federal government is able to counter and prevent domestic terrorism.

“Acts of domestic terrorism, such as the assault of the Capitol or attacks against our communities by Antifa and other violent, anti-American extremists, hurt our nation,” Rep. Reed said. “The Domestic Terrorism Commission Act of 2021 provides us with a structure to fully investigate these incidents and produce the information needed to better protect the American people.”

If enacted, H.R. 1178 also would “help reveal what causes individuals to turn to extremism and what can be done to prevent radicalization,” said Rep. Reed.

According to the text of the bill, H.R. 1178 would require an examination and report on the federal government’s failure to respond to and prevent domestic terrorist attacks in the United States during the past 20 years; and to ascertain, evaluate and report on the evidence developed by all relevant governmental agencies regarding the facts and circumstances surrounding such attacks over the last two decades.

A full and complete accounting of the circumstances surrounding domestic terrorist attacks that occurred in the past 20 years also would be required under the bill, as would the extent of the nation’s preparedness for and response to the attacks.

“If we truly care about the safety of our communities and the integrity of our democracy, we must act to stop extremism and prevent such attacks from occurring again,” Rep. Reed added.