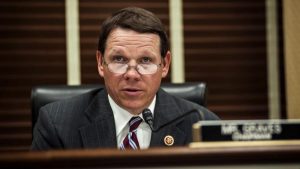 U.S. Rep. Sam Graves (R-MO) on Monday introduced the sweeping, bipartisan Water Resources Development Act (WRDA) of 2022 to improve the rivers and harbors of the United States and to fund the conservation and development of water and related resources across the country.

“WRDA projects provide benefits to our communities throughout the country and to the entire U.S. economy,” said Rep. Graves, ranking member of the U.S. House Transportation and Infrastructure Committee. “By improving navigation through our ports and inland waterways, strengthening flood control and river management practices, and addressing other water resources infrastructure, WRDA is vital to American families, businesses, and farms everywhere.”

Other sections of H.R. 7776 authorize studies and reports; deauthorize inactive projects and modify others; and authorize water resources infrastructure projects.

Priorities in the bill impacting Rep. Graves’ north Missouri constituents include strict limitations on the construction of new Interception-Rearing Complexes (IRCs) on the Missouri River and would ensure that the Army Corps of Engineers addresses any negative impacts on navigation, flood control or bank erosion caused by the construction of IRCs, according to a bill summary provided by the congressman’s staff.

Other Missouri-related provisions include those for levee maintenance, bank erosion and the creation of the Northern Missouri Environmental Assistance Project, which would help fund $50 million worth of sewer and stormwater projects in St. Joseph, Hannibal, Camden Point, Excelsior Springs, and Smithville, Mo.

“This commonsense bill takes a big step forward in making flood control and navigation the top priorities in managing our rivers,” Rep. Graves said. “It places strict limits on the supersized science experiments on the Missouri River; gives local levee districts along the Missouri and Mississippi rivers more tools to protect our communities from future floods; and makes new headway in addressing longstanding bank erosion issues on the lower Missouri River.

“It’s a great example of how Republicans and Democrats can still work together on bipartisan legislation that truly puts Americans first,” he said.