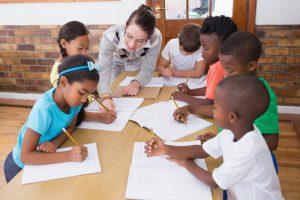 The Global Child Thrive Act, H.R. 4864/S. 2715, which the lawmakers introduced in October 2019, is on the president’s desk to be signed into law as part of the Fiscal Year 2021 National Defense Authorization Act (NDAA).

“I am thrilled to see our bipartisan and bicameral Global Child Thrive Act in this year’s NDAA,” said Rep. Fitzpatrick, a cosponsor of H.R. 4864 with bill sponsor U.S. Rep. Joaquin Castro (D-TX) and a bill author. “One of my greatest concerns has always been the welfare of children, not just children in the United States but children across the globe.”

“Children who experience poverty and hunger in their earliest years face developmental challenges that could shape their entire lives,” said Sen. Blunt, who sponsored S. 2715 with cosponsor U.S. Sen. Chris Coons (D-DE). “This bill would strengthen our country’s childhood development policies across the world, especially those affecting the most vulnerable children.”

The Global Child Thrive Act reauthorizes for FY 2020 through FY 2025 programs to provide assistance to orphans and other vulnerable children in developing countries, and requires the U.S. Agency for International Development to direct relevant executive branch agencies to incorporate early childhood development into current programs and promote inclusive early childhood development in partner countries, according to the congressional record bill summary.

The larger NDAA on Dec. 11 was presented to President Donald Trump for his signature to make the bill law.