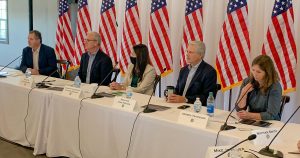 U.S. Sen. John Hoeven (R-ND) on Sept. 8 participated in a roundtable discussion with U.S. Department of the Interior Assistant Secretary for Fish and Wildlife and Parks Shannon Estenoz and North Dakota landowners regarding wetlands determinations.

During the event, which was hosted by U.S. Sen. Kevin Cramer (R-ND), the lawmakers urged Estenoz to ensure that the U.S. Fish and Wildlife Service (FWS) respects landowners’ property rights and provides due process when making and enforcing wetlands determinations.

“Our farmers and ranchers provide us with the highest quality, lowest cost food supply in the world, often in the face of tremendous challenges, like this year’s historic drought,” Sen. Hoeven said. “We shouldn’t add to their burdens by imposing unnecessary costs and unworkable regulations.”

In particular, Sens. Hoeven and Cramer outlined their efforts to establish a process to appeal FWS wetlands maps and resolve questions regarding compliance, such as in 2019, when they hosted then-Interior Secretary David Bernhardt in North Dakota to discuss the need to provide regulatory relief for farmers, ranchers and other landowners impacted by FWS wetlands easements.

Following that meeting, according to Sen. Hoeven’s office, the FWS started working with landowners and in March 2020 released guidance to finalize an administrative process to appeal wetlands maps and resolve questions regarding compliance with wetlands easements.

“That’s why we worked to establish the appeals process at FWS, which helped alleviate the need for expensive litigation when challenging wetlands determinations,” said Sen. Hoeven.

Under the Biden administration, Sen. Hoeven continues efforts to ensure the FWS takes a collaborative and fair approach to the appeals process that provides meaningful results for landowners and avoids costly litigation, while also protecting wetlands against drainage, according to his office.

“I appreciate Assistant Secretary Estenoz for her willingness to meet with our landowners and continue working with us to ensure they have access to a process that is fair, provides due process and results in good environmental stewardship,” Sen. Hoeven said.