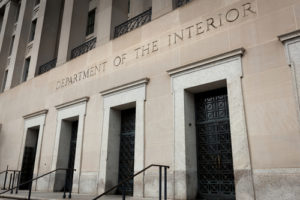 “The process appears to be a highly irregular departure from common practice, provoking many questions,” the members wrote in an Aug. 8 letter sent to Secretary of the Interior Deb Haaland. “Specifically, we are concerned that outside entities may have exerted undue influence on the decision to begin this reconsultation and on the ensuing process.”

According to their letter, the department’s Bureau of Reclamation and the California Department of Water Resources requested reconsultation with the U.S. Fish and Wildlife Service and the National Marine Fisheries Service into the 2019 Biological Opinions (BiOps) for water deliveries from the Central Valley Project and State Water Project.

The lawmakers wrote that the action also suggests that “scientific findings are not welcome if they could result in new water supplies being redirected from environmental causes to California farms, families and communities that are suffering from severe water shortages.”

And while the members have reached out to the department multiple times for answers, they wrote that they have not received a substantive explanation of the reasons for beginning reconsultation, which they said is expected to cost taxpayers more than $15 million.

“Moreover, the department has failed to show any new science that might serve as a basis for this decision,” wrote the lawmakers. “These circumstances lead us to suspect that external groups and political influence have influenced the decision to begin reconsultation in order to stop new water supplies from reaching millions of California households.”

In fact, for over a year, Rep. Valadao said in a statement that he has requested answers from the department related to its decision to reinitiate consultation of the 2019 BiOps.

“The unnecessary review of these scientifically sound Biological Opinions has caused significant uncertainty for Valley farmers about the future of their water supply, and a reversal of these opinions would be detrimental to our local economies,” said the congressman. “A simple explanation on the reasoning behind this decision is the very least Central Valley residents deserve.”

Rep. Newhouse pointed out that Congress must ensure the federal government is basing water delivery decisions on sound science rather than on political influence.

“Getting to the bottom of Interior’s inconsistent actions will ensure the Central Valley Project and California State Project can move forward in their critical work delivering water to the farms, families and communities throughout the region,” said Rep. Newhouse.

The lawmakers have requested that Secretary Haaland provide details and documents related to the new consultation as soon as possible.

Among the nine other members who signed the letter were U.S. Reps. Ken Calvert (R-CA), Young Kim (R-CA), and Michelle Steel (R-CA).