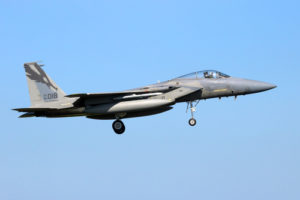 As the current F-15C aircraft at the 144th Fighter Wing of the California Air National Guard near their end of service, U.S. Rep. David Valadao (R-CA) and more than a dozen of his California colleagues requested specific new fighter aircraft to replace them.

“We understand that the Department of the Air Force is working now to identify replacement aircraft,” wrote Rep. Valadao and his colleagues in a Sept. 13 bipartisan, bicameral letter sent to Air Force Secretary Frank Kendall.

“We believe the F-35 or F-15EX would enable the 144th Fighter Wing to continue and expand its vital and long-standing mission to provide air superiority and homeland defense from its strategic location near the Pacific,” wrote the 15 lawmakers, who also included U.S. Sen. Dianne Feinstein (D-CA) and U.S. Reps. Kevin McCarthy (R-CA) and Ken Calvert (R-CA).

Given the essential mission of the 144th Fighter Wing — which Rep. Valadao and his colleagues said aligns with the top priority in the National Defense Strategy of defending the homeland and deterring China — “it is imperative” to provide the Wing with the most advanced aircraft available, according to their letter.

Additionally, they pointed out that the 144th Fighter Wing transitioned to the F-15C in 2013, and recapitalizing with an older aircraft would set up another transition when those aircraft reach either the end of their service or obsolescence.

“Providing the F35 or F-15EX aircraft would help ensure the 144th Fighter Wing is able to continue executing its mission without interruption,” Rep. Valadao and his colleagues wrote.