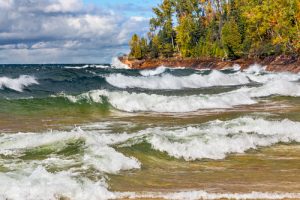 “We can never allow hazardous materials of any kind — particularly nuclear waste — to be stored anywhere near the Great Lakes. Period,” Rep. Upton said.

The congressman is one of 20 original cosponsors of House Resolution (H.Res.) 647, sponsored by U.S. Rep. Dan Kildee (D-MI), to express the sense of the U.S. House of Representatives that the United States president and Secretary of State should ensure that the Government of Canada does not permanently store nuclear waste in the Great Lakes Basin, according to the text of the resolution.

According to the text of the resolution, the Canadian government is proposing to build a permanent deep geological repository for high-level nuclear waste in the Great Lakes Basin less than 40 miles from Lake Huron in South Bruce, Ontario, Canada.

If there were a spill of nuclear waste into the Great Lakes, there could be “lasting and severely adverse environmental, health and economic impacts” because nuclear waste is highly toxic and can take tens of thousands of years to decompose to safe levels, according to the resolution’s text. Currently, more than 40 million individuals in both Canada and the United States depend on the fresh water from the Great Lakes for drinking water, the resolution states.

“The Great Lakes are the pride and joy of Michigan. They are home to a wide range of plant and animal species, generate more than $3.1 trillion in economic activity, support hundreds of thousands of jobs, and underpin Michigan’s flourishing fishing, boating and tourism industries,” said Rep. Upton. “The long-term preservation of these natural treasures remains a top priority for me and the entire Great Lakes Caucus.”

H.Res. 647 has been referred for consideration to the U.S. House Foreign Affairs Committee.