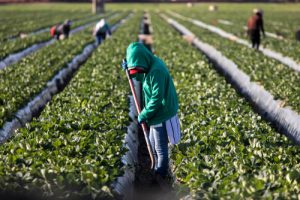 However, they pointed out that the Biden administration’s “Proclamation on Suspension of Entry as Immigrants and Nonimmigrants of Certain Additional Persons Who Pose a Risk of Transmitting Coronavirus Disease 2019” limits the travel of noncitizens from several countries, including South Africa, to the United States.

“We are concerned this will impact our essential agriculture workers participating in the H-2A guest worker program,” wrote Rep. Upton and his colleagues, noting that the most recent available data indicates that roughly 7,000 of these essential workers originate from South Africa. “Many American farmers are counting on their timely arrivals to the U.S. this upcoming February, March, and April, as they make plans for their important upcoming growing seasons.”

Rep. Upton and his colleagues requested that H-2A workers coming to the U.S. be exempt from the travel restrictions outlined in the administration’s proclamation.

“While we believe protecting our nation from new strains of COVID-19 is critically important, we also believe it is in our national interest to ensure production of food, fuel, and fiber,” the members wrote. “Recognizing the importance of mitigating the spread of new strains of COVID-19, we request that with proper health and safety precautions in place, H-2A workers from South Africa be allowed to travel to the United States to work and operate on American farms to grow our country’s safe and nutritious food.”