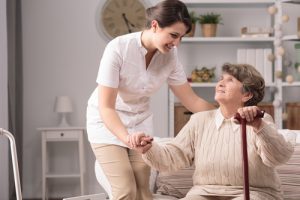 Both houses of Congress last week resolved differences over the bipartisan Supporting Older Americans Act of 2020, which is now headed to the president’s desk to be signed into law, according to U.S. Rep. Elise Stefanik (R-NY).

The congresswoman in September 2019 signed on as the lead original cosponsor of H.R. 4334 with bill sponsor U.S. Rep. Suzanne Bonamici (D-OR) to establish, reauthorize and revise several programs administered by the U.S. Department of Health and Human Services and the U.S. Department of Labor related to care for the elderly, according to the congressional record summary.

The U.S. House of Representatives in October 2019 approved the bill, with the U.S. Senate on March 3 amending and passing it, then sending the measure back to the House, which on March 11 agreed to the Senate amendment without objection.

Rep. Stefanik led the House passage of H.R. 4334, which includes provisions from three pieces of separate legislation that she authored.

“I’m grateful the final bill includes critical provisions from three pieces of my legislation: to enhance individualization in caregiving, give those diagnosed with early-onset Alzheimer’s receive equal recognition under the law, and ensure our country’s Holocaust survivors are given specialized care for their unique needs due to the unconscionable suffering they faced,” said Rep. Stefanik.

Specifically, the provisions came from the Supporting Family Caregivers Act of 2019, H.R. 3782; the Younger Onset Alzheimer’s Act, H.R. 1903; and the Trauma-Informed Modernization of Eldercare (TIME) for Holocaust Survivors Act, H.R. 4077. Rep. Stefanik was an original cosponsor of each bill.

“The North Country is home to one of the largest constituencies of older Americans in the country, and I’ve been honored to lead the effort to ensure they have the support and dignity they deserve in their elder years,” Rep. Stefanik said.