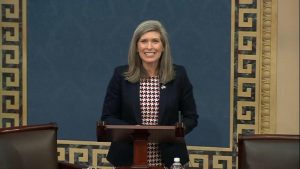 The U.S. Senate on May 4 adopted a measure introduced by U.S. Sen. Joni Ernst (R-IA) to prevent China and Russia from exploiting Small Business Administration (SBA) programs as part of the Bipartisan Innovation Act (BIA).

The BIA consists of the merged United States Innovation and Competition Act (USICA) and the America Creating Opportunities, Pre-Eminence in Technology, and Economic Strength (COMPETES) Act, which is under conference negotiation.

“We can and should take serious steps to compete with the Chinese Communist Party, but pouring billions of dollars into research and development with little oversight or accountability is not the answer,” Sen. Ernst said. “Hardworking Iowans’ tax dollars should never be used to subsidize Chinese and Russian shell companies, particularly at the expense of American small businesses, and this effort will defend against foreign influence within these programs and protect our national security.”

With the Senate considering the BIA, Sen. Ernst led an effort to require SBA programs — specifically the Small Business Innovation Research (SBIR) and Small Business Technology Transfer (STTR) programs — undergo security reforms to prevent Chinese and Russian shell companies from accessing national security-related technology from them, according to information provided by her staff.

The SBIR and STTR programs provide innovation funding to American small businesses. China has become one of the largest beneficiaries of these programs because of the lack of adequate oversight, the information says.

Sen. Ernst’s measure — which was adopted as part of the BIA — would prevent Congress from reauthorizing the programs without significant reforms to combat adversarial foreign influence in these programs and to protect our national security.