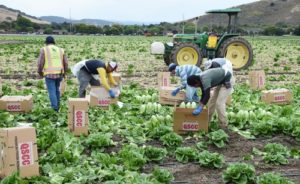 “If significant H-2B cap relief is not provided, there will be severe consequences for seasonal businesses and our economy generally,” wrote Sens. Rounds and Tillis along with U.S. Reps. Andy Harris (R-MD) and Chellie Pingree (D-ME) and more than 130 other members in a bipartisan, bicameral letter sent to U.S. Department of Homeland Security (DHS) Security Secretary Kirstjen Nielsen.

The lawmakers said that the secretaries of DHS and the U.S. Labor Department should immediately release the roughly 69,320 additional H-2B visas for fiscal year 2019 as authorized by the recent appropriations package signed into law earlier this year.

“Given the near historic low unemployment rate, the constant oversubscription to the program and its importance to our local economies, we strongly urge you to use the discretion afforded your office in the most recent appropriations bill to release, without delay and to the greatest extent allowed by law, additional H-2B visas sufficient to meet the certified demand of our seasonal employers,” the lawmakers wrote.

As required by law, employers first must make a concerted effort to hire American workers to fill open positions. H-2B visas fill needs for U.S. small businesses when there aren’t enough American workers willing to fill the temporary, seasonal positions. Employers often must spend extra money to hire temporary H-2B workers, who are paid a prevailing wage set by the Labor Department, according to information provided by Sen. Rounds’ office.

The additional H-2B visas for FY 2019 are authorized under the Consolidated Appropriations Act of 2019, House Resolution 31, which became Public Law No: 116-6 on Feb. 15.

However, because the additional visas haven’t yet been released, several seasonal businesses already have been forced to scale back or shut down operations, cancel or default on contracts, and lay off full-time U.S. workers, wrote Sens. Rounds and Tillis along with their congressional colleagues.

“Failing to release additional H-2B visas will only result in more closures or scale backs for these businesses,” according to their letter, in which they also noted that the 15,000 additional visas released in both FY 2017 and FY 2018 “were wholly inadequate to meet the demonstrated, certified needs of our seasonal employers.”

The lawmakers said they also expect Secretary Nielsen to handle the situation promptly, writing that they “do not believe that an additional rulemaking is required this year due to the timing of the law’s enactment” in January.

“We urge you to expeditiously release a sufficient number of additional visas (up to the 69,320 allowed by law) to allow these vital businesses to continue to fulfill their contracts, retain their American workers, make additional capital investments, expand their businesses and maximize their contribution to the American economy,” they wrote.