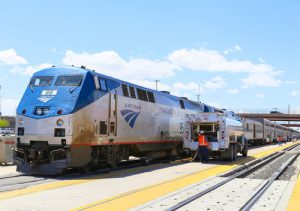 “As the divide between urban and rural communities in America continues to expand, passenger rail services like the Southwest Chief are invaluable in connecting Kansans to the rest of the country while also bringing visitors from out of state to our local communities,” said Sen. Moran, who introduced the amendment on July 31.

“We heard from many Kansans strongly opposed to the proposed bus service within the route,” said Sen. Roberts.

S. Amdt. 3665 was included in the Interior, Environment, Financial Services and General Government, Agriculture, Rural Development, Food and Drug Administration, and Transportation, Housing and Urban Development Appropriations Act of 2019, H.R. 6147, which the Senate approved on Aug. 1, 92-6, and then sent back to the U.S. House for reconciliation.

The amendment would require Amtrak to provide resources for maintenance and safety improvements along the Southwest Chief route and would compel the company to fulfill its obligations to match funds for the Transportation Investment Generating Economic Recovery (TIGER) IX discretionary grant, according to a summary provided by Sen. Gardner’s office. The Senate approved the amendment the same day it was introduced.

TIGER discretionary grants are now known as the Better Utilizing Investments to Leverage Development, or BUILD Transportation Discretionary Grant program, according to the U.S. Department of Transportation (DOT). The program gives DOT the opportunity to invest in road, rail, transit and port projects that promise to achieve national objectives, the department said, adding that Congress has dedicated almost $5.6 billion for nine rounds of national infrastructure investments to fund projects having significant local or regional impact.

“The amendment secured by the bipartisan coalition in the appropriations bill will set aside funding for route improvements and enhancements, providing the opportunity to ensure the Southwest Chief stays in Colorado and continues servicing the rural areas that desperately need it,” Sen. Gardner said.

The senators sent a May 31 letter to Amtrak President and CEO Richard Anderson condemning Amtrak’s decision not to match TIGER grant funds.

“The Southwest Chief is an important component of southeastern Colorado’s tourism economy, and we will do all we can to preserve it,” said Sen. Bennet. “We’ll continue to work closely with lawmakers from Colorado — and also New Mexico and Kansas — to keep running the Southwest Chief through our state.”

The Senate also last week overwhelmingly passed a Sense of the Congress measure to affirm support for the long-distance rail service, according to the statement from Sen. Gardner’s staff.

The action followed a July 26 letter sent by the senators to Amtrak’s Anderson, urging him to uphold Amtrak’s promise as part of a long-time public-private partnership to continue the Southwest Chief’s services in their states.

“I applaud the bipartisan efforts to keep the Southwest Chief operational for our rural communities and will continue working with Amtrak to make certain this route remains available for the Kansans who need it,” Sen. Moran said.