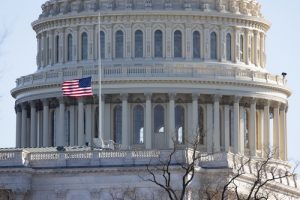 The United States flag would be lowered to half-staff on all federal buildings every Aug. 31 to support Overdose Awareness Day under a bipartisan resolution introduced by U.S. Rep. Brian Fitzpatrick (R-PA).

The congressman joined 25 other cosponsors to introduce House Resolution (H.Res.) 349, which is sponsored by U.S. Rep. Lori Trahan (D-MA) and would resolve that the U.S. House of Representatives supports the recognition of Overdose Awareness Day in the United States and that federal buildings would be encouraged to lower their flags to half-staff to support awareness of overdoses, according to the text of H.Res. 349.

Among the members who joined Rep. Fitzpatrick as an original cosponsor of the resolution were U.S. Reps. John Curtis (R-UT) and Mark Amodei (R-NV).

Rep. Fitzpatrick and the same group of lawmakers also sent an April 21 letter to President Joe Biden requesting that Overdose Awareness Day be recognized as a day that honors the lives of Americans lost to drug overdoses.

“Our nation has mourned the loss of lives during the coronavirus pandemic by lowering flags to half-staff when we reached the grave death toll of 100,000,” the members wrote. “The lowering of our flags served as a necessary and national expression of grief. Those deaths due to COVID-19 left behind an absence in the hearts of all who knew and loved someone who passed.”

Rep. Fitzpatrick and his colleagues wrote that they “are grateful for the federal government’s work in acknowledging these crises and believe that your order to lower flags at half-staff on Overdose Awareness Day would be the appropriate expression in acknowledging the lives lost to substance use disorder.”

Since 1999, more than 750,000 Americans have died due to drug overdoses, and the latest numbers from the Centers for Disease Control and Prevention suggest an acceleration of overdose deaths during the ongoing pandemic, according to their letter.

“This crisis claimed over 81,000 lives just last year – the highest number of overdose deaths ever recorded in a 12-month period – and has shown no indication of declining,” they wrote.