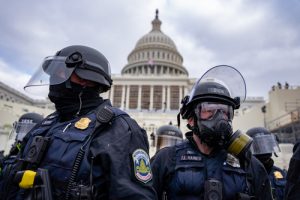 U.S. Sen. Susan Collins (R-ME) recently unveiled a bipartisan, bicameral bill to ensure federal public safety officers who are injured in the line of duty receive their full retirement benefits, which they currently lose with a work-related injury.

“Communities in Maine and across the country count on federal law enforcement officers, firefighters and other public safety employees when tragedy strikes,” Sen. Collins said. “These brave men and women make countless sacrifices to protect our communities, and their strenuous and often dangerous occupation puts them at an increased risk of injury. Should they be injured in the line of duty, this bipartisan bill would ensure that first responders do not lose the retirement benefits they have earned.”

Specifically, the measure would permit disabled law enforcement officers, Customs and Border Protection officers, firefighters, air traffic controllers, nuclear material couriers, members of the Capitol Police, members of the Supreme Court Police, employees of the Central Intelligence Agency, and diplomatic security special agents of the U.S. State Department to receive retirement benefits in the same manner as if they had not been disabled, according to the congressional record bill summary.

According to information provided by Sen. Collins’ office, Congress created an accelerated retirement system and established a mandatory early retirement age of 57 for these federal jobs, which are designated as “6c” occupations. These employees pay a higher percentage of their wages toward retirement and are entitled to an annuity after 20 years of service.

If injured at work and unable to complete their mandatory years of service, funds paid into their early retirement plans are eliminated, even if they return to the federal government in a non-6c position, the information states.

If enacted, the bill would allow federal public safety officers to retain their 6c retirement status when they return to the federal government after being injured in the line of duty, and they still would be able to retire after 20 years of federal service and be eligible to receive a lump sum payment of the benefits owed from their 6c retirement funds, according to text of the bill.

The bill is supported by the Federal Law Enforcement Officers Association, the National Federation of Federal Employees, and the International Association of Fire Fighters.