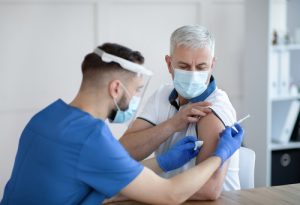 “I look forward to swift consideration of this vital piece of legislation by the House of Representatives,” said Rep. Amodei on Tuesday in a statement.

The Veterans’ Access to Care Concerning Inoculations Needed in Emergency Situations (VACCINES) Act, H.R. 4506, which Rep. Amodei sponsored with original cosponsor U.S. Rep. Conor Lamb (D-PA), would ensure that all veterans, regardless of their status within the U.S. Department of Veterans Affairs (VA) healthcare system, would be eligible to receive testing and vaccination services in the event of a future national public health emergency, according to a bill summary provided by Rep. Amodei’s office.

“The VACCINES Act will grant the VA the authority to ensure that all veterans have access to this care during these circumstances,” Rep. Amodei said. “As we have seen throughout the course of the COVID-19 pandemic, a virulent and highly transmissible disease does not discriminate based on an individual’s age or health status, and removing bureaucratic barriers to diagnostics and life-saving vaccines is the most effective way toward getting back on the road to recovery.”

The Veterans of Foreign Wars and the American Legion endorsed H.R. 4506, which has been referred to the U.S. House Veterans’ Affairs Committee for consideration.

“Going forward, it is vital we learn from the pandemic to ensure a better response on behalf of the federal government during future public health emergencies. This is why The American Legion is pleased to support this bill which would mandate VA furnish vaccines to veterans during future public health emergencies without copayments,” said Bill Oxford, National Commander of The American Legion.