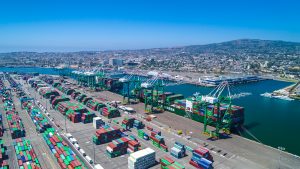 The increased shipping costs, known as Container Excess Dwell Fees, were imposed starting on Nov. 22 and the lawmakers are concerned that they will be passed on to American consumers.

“These fees, just like tariffs, ultimately will be passed onto the American consumer in the form of higher prices for goods at a time when the prices are already at record highs,” the senators wrote in a Nov. 19 letter sent to Federal Maritime Commission Chairman Daniel Maffei.

“With this fee structure in place, the costs may increase astronomically,” wrote the senators.

And while sympathetic to the current strain placed on all facets of the global supply chain, the lawmakers wrote that it is nonetheless misguided “to levy an exorbitant fee” as ports across the United States are experiencing unprecedented congestion and record container volumes.

“These hyper-demurrage fees are not the solution,” they wrote. “If left in place, they will have significant consequences for importers and American consumers.”

The lawmakers called on the FMC to immediately review the fees against the statutory and regulatory requirements within the commission’s jurisdiction and to review the ocean carriers’ plan for passing through the fees to shippers.

“The commission’s mission is to protect American shippers from the unfair practices of ocean carriers, freight consolidators, and port operators,” wrote the senators. “Now, in the midst of these already challenging times, oversight is needed more than ever.”