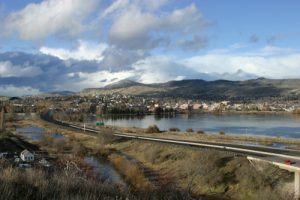 Klamath Basin irrigators in Oregon and California will be able to access up to $10 million in federal emergency drought relief funds under a bill supported by U.S. Rep. Greg Walden (R-OR) that became law on Oct. 30 with the president’s signature.

President Donald Trump signed into law S. 3758, introduced in May by U.S. Sens. Jeff Merkley (D-OR) and Ron Wyden (D-OR) to amend and make certain technical corrections to the Klamath Basin Water Supply Enhancement Act of 2000, according to the congressional record bill summary. The U.S. House of Representatives approved S. 3758 on Oct. 1 after U.S. Senate approval of the bill on June 30.

“I want to thank President Trump for swiftly signing this bill into law and taking care of the hardworking farmers and ranchers in the Klamath Basin,” Rep. Walden said.

The new law provides flexibility in how the federal relief funds may be used, enabling irrigators to access the funding when there is a severe shortage of water, according to information provided by Rep. Walden’s office, which added that the technical correction clarifies the authority for irrigators to access the funds for specific strategies, such as land idling and groundwater pumping, during times of drought.

“This is welcome news for irrigators in the Klamath Basin, who are enduring another drought-stricken year, unprecedented wildfires, and the COVID-19 pandemic all at the same time,” said Rep. Walden. “This legislation will ensure they have the tools they need to get through these hard times, as well as prepare irrigators in the Klamath Basin if they are hit with severe drought in the years ahead.”

Signing of the new law follows a July event where Rep. Walden joined U.S. Secretary of Interior David Bernhardt and Commissioner of Reclamation Brenda Burman for a meeting with key stakeholders and Klamath Tribes aimed at finding a long-term solution to water disputes in the Klamath Basin.