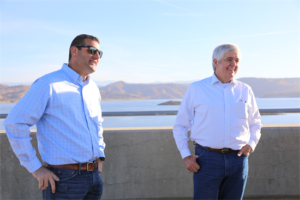 “These discussions highlighted the reforms desperately needed to bring more water to the valley,” Rep. Valadao said. “For too long, the Central Valley has suffered from devastating drought conditions, unfair water allocations, and a gross mismanagement of the water we do have by Sacramento bureaucrats and environmentalists.”

The lawmakers met with water agencies, stakeholders, and farmers from across the valley, including in the Kings River Conservation District, the Westlands Water District, and in Kern County and the Tulare Irrigation District, among several others.

“Ensuring our rural and agricultural communities throughout the Central Valley have access to the water they need has always been my top priority,” said Rep. Valadao. “Thank you to Ranking Member Bentz for making the trip to the Central Valley to have these important conversations on drought resiliency and water management, and for his continued leadership on this critical issue.”

Rep. Bentz said that drought challenges are being faced across the West, including in his Oregon district. “It was great to have the opportunity to tour water systems with Congressman Valadao in the Central Valley,” he said. “We must adapt if we are to meet the water needs of cities, farms, ranches, homes, businesses, and tribes.”

If enacted, H.R. 9084 would promote water conveyance through the Sacramento-San Joaquin River Delta, consistent with the Endangered Species Act, and advance key surface water infrastructure projects, according to a bill summary provided by Rep. Valadao’s office.

The bill is under consideration in the U.S. House Natural Resources Committee.