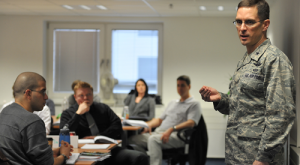 Veterans seeking to further their careers via non-traditional technology courses now may apply to participate in a pilot program created under the Veteran Employment Through Technology Education Courses (VET TEC) Act.

The VET TEC Act, H.R. 1989, was introduced by Rep. McCarthy and became law in 2017 as part of the Harry W. Colmery Veterans Educational Assistance Act of 2017.

“I am thrilled to see the VET TEC program’s official launch,” Rep. McCarthy said on May 9. “VET TEC will help empower our nation’s heroes by providing them with the technical skills needed to ensure a smooth transition into today’s evolving workforce.”

The law authorizes the VA to contract with technology education program providers to provide non-traditional technology courses to veterans; requires one day of unexpired GI Bill benefits for participation; and offers veterans a housing stipend, according to Rep. McCarthy.

“After visiting Udacity in 2017, I was immediately struck by the potential of non-traditional education courses and how they can empower America’s veterans by equipping them with invaluable training they can use in their post-military careers,” the congressman said.

Rep. McCarthy added that all interested veterans are encouraged to apply to the VET TEC program.
“I look forward to hearing about their experiences,” he said.