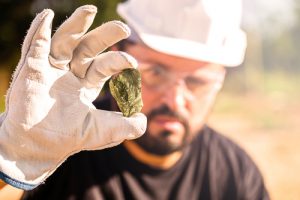 U.S. Rep. Pete Stauber (R-MN) led a contingent of Republican colleagues from his home state in requesting that President Joe Biden follow through on the publication of an executive order that prioritizes the nation’s domestic supply chains for semiconductors, modern energy technologies, healthcare applications, and others.

“Minnesota stands ready and able to lead, as northern Minnesota contains one of the largest, untapped mineral formations in the world, the Duluth Complex,” wrote Rep. Stauber and three colleagues, including U.S. Rep. Tom Emmer (R-MN), noting that the so-called Iron Range today provides nearly 80 percent of domestic steel production, as well as quality jobs, school funding, and community resources for recreation and water access, among others.

And while the Duluth Complex is home to 88 percent of the United States’ cobalt reserves and 95 percent of the nation’s nickel reserves, America “unfortunately” remains dependent on countries with little to no labor or environmental standards for the materials needed to feed manufacturing supply chains, the members wrote, noting that Executive Order 14017 regarding America’s supply chains would empower Minnesota’s miners to safely extract the abundance of critical minerals located in Minnesota’s Eighth Congressional District.

In fact, according to a separate statement, Rep. Stauber pointed out that the U.S. currently imports 78 percent of its cobalt from the Congo, a nation that utilizes child slave labor. “Why are we relying on international child labor, when we can safely produce these minerals here in Minnesota under the best environmental and labor standards in the world?” he said.

If Biden is serious about strengthening U.S. supply chains, Rep. Stauber said that the president will disregard anti-jobs groups seeking to end mining in northern Minnesota and instead empower the state’s skilled workers to responsibly source the minerals while also reducing American dependence on “unreliable nations with poor labor and environmental standards.”

“Former President Trump understood how important northern Minnesota is to our domestic supply chains,” Rep. Stauber said. “Now, I plan to hold President Biden accountable on his recent Executive Order. My hope is that this letter will educate the Biden administration on the strategic importance of the Duluth Complex, as it contains one of the largest, untapped mineral deposits in the world.”