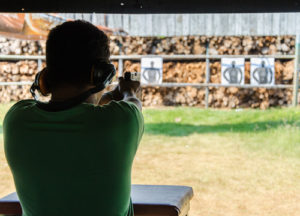 Recreational target shooting would be permitted in designated areas of public lands under legislation sponsored on Oct. 14 by U.S. Rep. Blake Moore (R-UT).

“This legislation is an important step in expanding access to recreational shooting practice,” Rep. Moore said. “Americans from coast to coast love spending time in the outdoors, and expanding our ability to recreate on and enjoy our public lands is one of my core focuses in Congress.”

Rep. Moore introduced the Range Access Act, H.R. 9183, to require the U.S. Forest Service and the Bureau of Land Management (BLM) to ensure that each qualifying National Forest and BLM district has at least one designated public recreational shooting range that does not require a user fee, according to a bill summary provided by the lawmaker’s office.

If enacted, H.R. 9183 also would enhance Pittman-Robertson funding under the Pittman-Robertson Act, an excise tax that is levied on the purchase of ammunition, firearms, and archery equipment. The tax funds conservation programs and since being enacted in 1937 has provided more than $15 billion to states, the summary says.

“The Range Access Act would establish free shooting ranges for sportsmen to safely participate in target practice while supporting our wildlife conservation and local economies,” said the congressman.

Under the bill, a designated shooting range would be defined as a developed and managed area on federal land that is designed and operated specifically for the purposeful discharge of legal firearms, firearms training, archery, or other associated activities, according to the bill’s text.