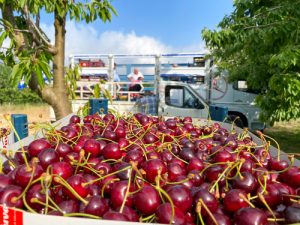 Cherry growers in Michigan and across the United States now have a better opportunity to sell their fruits in an Asian market, according to U.S. Rep. Bill Huizenga (R-MI), who helped secure the exemption of a 15 percent tariff on U.S. tart cherry juice exports to Taiwan.

“When our farmers and growers are able to compete on a level playing field, Michigan families benefit,” said Rep. Huizenga on Tuesday. “This announcement is great news for Michigan cherry growers and the agricultural community as a whole.”

The removal of the tax will create more opportunity and provide significantly greater market access for both Michigan cherry growers and processors, according to the congressman’s office.

“Michigan farmers and growers produce some of the highest quality fruits, vegetables and specialty crops in the world,” Rep. Huizenga said. “Estimates show that exporting tart cherry juice to Taiwan has the potential to reach over $1 million.”

Such potential will result in increased economic opportunity for growers, processors and families across Michigan, said Rep. Huizenga.

Michigan grows 75 percent of the tart cherries grown in the U.S., according to the Cherry Marketing Institute (CMI), a national research and promotion organization that works on behalf of Michigan, Utah, Wisconsin, and Utah cherry growers.

CMI President Julie Gordon thanked Rep. Huizenga and the U.S. Department of Agriculture (USDA) team in Taiwan for their work to help secure a Taiwan CNS 2377 revision to include U.S. Montmorency Tart Cherry Juice and exempt it from the 15 percent tax, opening the door for the U.S. tart cherry industry to be more competitive in the Taiwan market.

Gordon added that officials in Taiwan say this process usually takes 10 years. “With the great partnership of USDA and Rep. Bill Huizenga’s team we were able to get the job done in record time,” she said.