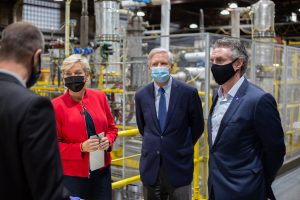 “North Dakota is a global energy powerhouse, and the approach we are taking is a model for the nation, enabling us to make the best use of all of our state’s abundant energy resources,” said Sen. Hoeven, who joined North Dakota Gov. Doug Burgum to host an Oct. 14 meeting at the University of North Dakota’s Energy & Environmental Research Center in Grand Forks, N.D., with U.S. Department of Energy (DOE) Secretary Jennifer Granholm.

Sen. Hoeven and the governor, who both invited Granholm to visit the state, toured the Energy & Environmental Research Center with the DOE secretary before joining researchers and energy sector stakeholders for a roundtable discussion on the future of energy and how North Dakota is contributing to U.S. energy independence.

During the roundtable, Sen. Hoeven outlined how North Dakota has been leading efforts for more than a decade to crack the code on carbon capture, utilization and storage (CCUS) technologies, which he said will play a necessary role in ensuring the United States remains energy secure while continuing to leverage its oil, gas and coal resources to ensure Americans have access to reliable and affordable energy.

“We invited Energy Secretary Granholm here to discuss our state’s leadership in CCUS and how to ensure we remain energy secure,” he said. “That means harnessing our vast coal, oil and other diverse energy sources, maintaining baseload power to support the reliability and affordability of the grid and reducing our dependence on less stable parts of the world.”

The senator also highlighted his work as the previous governor to establish the North Dakota CO2 Storage Workgroup in 2008 and advanced a bill through the state legislature to create a regulatory framework for carbon storage under the North Dakota Industrial Commission, according to his office.

And in his current position, Sen. Hoeven also helped secure Environmental Protection Agency approval of the state’s permitting program for the permanent storage of CO2 using Class VI wells, the first such approval in the nation, his office said.