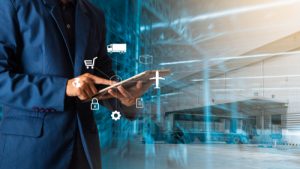 “The unfolding global supply chain crisis is evidence that America can no longer afford to rely on foreign adversaries like China and Russia for our essential goods and supplies,” Rep. Fitzpatrick said. “We must act now to ensure the U.S. has a resilient and secure supply chain that will bolster American innovation, job creation and national security.”

The National Critical Capabilities Defense Act of 2021, H.R. 6329, which Rep. Fitzpatrick introduced on Dec. 20 with bill sponsor U.S. Rep. Rosa DeLauro (D-CT), specifically would require reviews of United States investment in foreign countries that may threaten national critical capabilities, according to the text of the bill.

H.R. 6329 “is an immediate, bipartisan response to the supply chain bottleneck that is plaguing our country and will increase transparency surrounding the offshoring of critical industries and manufacturing,” said Rep. Fitzpatrick.

If enacted, H.R. 6329 would authorize the creation of a National Critical Capabilities Committee to review and block certain U.S. production offshoring, development or manufacturing of identified critical national capabilities being made within adversarial nations, including medicines, medical supplies and essential components for the electrical grid, among others, according to a bill summary provided by Rep. Fitzpatrick’s staff.

Led by the U.S. Trade Representative, the committee would be comprised of representatives from several other federal agencies, including the Centers for Disease Control and Prevention, the U.S. Securities and Exchange Commission, the Federal Emergency Management Agency, and the Federal Aviation Administration, among others. The committee would have the ability to review or block certain outsourcing that compromises national security or a possible pandemic response.

Additionally, H.R. 6329 would authorize the president, in consultation with the committee, to take action to mitigate any national security risks associated with a transaction, and would establish a rulemaking process to add relevant industries covered under national critical capabilities systems, services and assets within the committee’s purview.

“The COVID-19 pandemic and semiconductor shortages exposed that critical United States supply chains were not up to the task of robustly responding to America’s needs,” said Rep. DeLauro. “We have to learn from our mistakes and cannot allow outbound investments from the United States to take critical supply chains overseas and into the hands of our adversaries.”