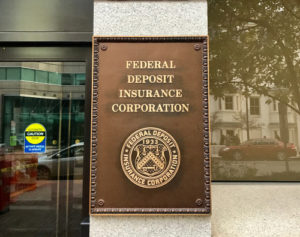 Previously, the FDIC established the Office of Supervisory Appeals (OSA), a committee composed of former, non-current FDIC employees with exam experience tasked with handling the appeals process for supervised entities, according to an Aug. 2 letter Rep. Emmer and his colleagues sent to FDIC Acting Chairman Martin Gruenberg.

However, a few months later, Gruenberg eliminated the OSA and reinstated the FDIC’s Supervision Appeals Review Committee (SARC), doing so without notice and opportunity for public comments in advance, the lawmakers wrote.

“Instead, the FDIC opened a public comment period after the change took effect, which created the appearance that the agency had no genuine intention to seek or respond to input from stakeholders,” according to their letter.

“The FDIC knew that their choice to revert to a partisan appeals process would be met with concern from legislators and stakeholders alike,” Rep. Emmer said in a statement. “Nevertheless, they chose to abandon an independent, apolitical body without even asking for public comment.”

The committee members are concerned that disbanding the OSA and reinstituting the SARC without prior public input may be in violation of the Administrative Procedure Act, and they’re worried that the move also “unfairly advantages the FDIC versus the entities it regulates during the appeals process by exposing the process to politicization.”

To understand how and why the FDIC disbanded the OSA and replaced it with the SARC, the lawmakers posed several questions they requested Gruenberg answer as soon as possible.

“The American people deserve answers on how and why this previously nonpartisan body was abandoned, and how the FDIC made their decision to return to cronyism,” said Rep. Emmer.