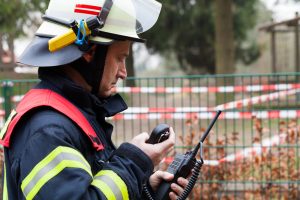 The current status of emergency communication networks, and steps taken to improve communication for federal, state and local first responders since 9/11 and Hurricane Katrina, were the focuses of a subcommittee hearing convened by U.S. Rep. Dan Donovan (R-NY) on Friday.

Donovan, the chairman of the House Homeland Security Subcommittee on Emergency Preparedness, Response, and Communications, noted in his opening remarks that state and local authorities have invested billions of dollars in communications networks — including governance, training and equipment since the Sept. 11, 2001 attacks and Hurricane Katrina in 2005.

The Department of Homeland Security Office of Emergency Communications has also completed two national emergency communications plans to guide those state and local efforts, Donovan added, and a contract has been awarded to AT&T to build the first nationwide public safety broadband network, known as FirstNet. About half the states have agreed to join the FirstNet system so far.

“We know this work is making a difference,” Donovan said. “In contrast to 9/11 and Hurricane Katrina, first responder networks, for the most part, remained operable during the response to Superstorm Sandy, even while commercial networks experienced outages. It is my understanding that first responder networks were largely able to withstand the impacts of Hurricanes Harvey and Irma.”

Despite progress that has been made, however, a roundtable held earlier this year between leaders of the Subcommittee on Emergency Preparedness and the Subcommittee on Cybersecurity and Infrastructure Protection revealed that cyber threats to emergency communications networks presents one of the greatest challenges going forward.

“We’ve seen the evolution of communications technology, providing enhanced capabilities for first responders,” Donovan said. “But, with those benefits come the risk of cybersecurity vulnerabilities, as many of these systems and applications are IP based and interconnected. We must ensure our nation’s first responders are aware of cybersecurity threats and can work to address them.”

“I am concerned about a requirement that first responder radio networks operating on the T-Band must migrate off that spectrum by 2021,” Donovan said. “This will have significant impact on a number of major metropolitan areas, including New York City, and studies have suggested that there isn’t sufficient alternative spectrum for these jurisdictions to use.”

Under the Middle Class Tax Relief and Job Creation Act of 2012, the Federal Communications Commission must auction the T-Band spectrum by 2021, which is a communications tool used by public safety officials. That same legislation also established FirstNet.

As the public safety broadband network advances, Donovan concluded, the importance of mission critical voice communication networks must be reflected in federal policies and priorities.