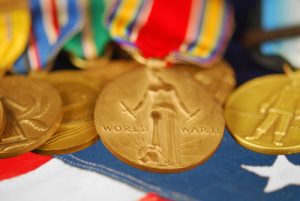 “It is an incredible honor to call one of the two remaining recipients, U.S. Marine Corps Corporal Hershel “Woody” Williams, our own,” wrote Capito and her colleagues in an Oct. 28 letter sent to President Donald Trump. “During the Battle of Iwo Jima, Woody Williams valiantly stormed pillboxes with his flamethrower, as the last American demolition sergeant on the beach, clearing the way for his fellow soldiers.”

The lawmakers wrote that a state funeral “would not only recognize that one veteran, but all 16 million men and women who put their lives on the line during the war to defend the freedoms that we hold dear.”

“The sacrifices of all who served during World War II have not gone unrecognized, but it is crucial that we as a nation continue to show our immense gratitude for the greatest generation,” wrote Sen. Capito, who was joined in signing the letter by U.S. Sen. Joe Manchin (D-WV) and U.S. Reps. David McKinley (R-WV), Alex Mooney (R-WV), and Carol Miller (R-WV).