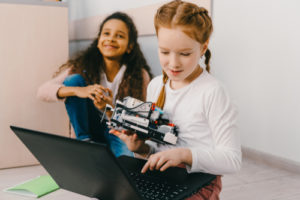 “By finding ways to introduce students to STEM skills and knowledge at an early age, we can help them better learn to take risks, solve problems, and build confidence — especially among young women and girls,” Sen. Capito said on Monday.

The Building Blocks of STEM Act, S. 737, sponsored by U.S. Sen. Jacky Rosen (D-NV), would create and expand upon the foundation’s STEM education initiatives for young children and would include new research grants to bolster girls participation in computer science, according to the lawmakers.

“It is so important for young children, especially our girls, to be introduced to opportunities available to them in the fields of science, technology, engineering, and math,” said Sen. Rosen. “This bipartisan legislation will help ensure that our children are prepared with the education necessary to succeed in a 21st-century economy while also taking steps to close the gender gap in STEM.”

Sen. Capito added that the technology industry provides ample job opportunities for Americans and will continue to “contribute to shaping our economy right here at home in West Virginia and in communities across the country.”

Sen. Blackburn agreed and pointed out that the tech industry is growing at an unprecedented pace.

“The Building Blocks of STEM Act will help to address the need for computer skills while also working to close the existing gender gap in this field,” said Sen. Blackburn. “By allocating funding to science initiatives for young children and computer science education for young girls, we can fill a vacancy in the workforce and set students up for success in their futures.”

“With the passage of this bill, we can pave the way for more women trailblazers in tech and leaders in science who will make great contributions to our country and the world. #BridgingtheGap,” Sen. Fischer tweeted this week.

If enacted, S. 737 would direct NSF to more equitably distribute federal funds for early childhood education in its Discovery Research PreK-12 program, which currently focuses the majority of its research on students in middle school and older, according to the lawmakers.

S. 737 also would direct NSF to award research grants to increase understanding of the factors that contribute to the participation of young girls in STEM activities and to develop interventions in pre-K and elementary school classrooms to increase girls participation in computer science, the lawmakers said.

Similar bills, the same-named S. 3471/H.R. 3397, were introduced during the 115th Congress in the U.S. Senate and the U.S. House of Representatives. The Senate bill stalled in committee, while the House version unanimously passed the House as part of a combined package of STEM education bills, but failed to receive a vote in the Senate.

The newly reintroduced S. 737 has been referred for consideration to the U.S. Senate Commerce, Science, and Transportation Committee.

“I’m proud to team up with my colleagues to reintroduce this important bipartisan legislation so we can help young minds realize their incredible potential, inspire them to pursue careers in critical industries, and empower them to follow their dreams,”said Sen. Capito.

Companion legislation in the House, H.R. 1665, which also was introduced on March 11, is under review by the U.S. House Science, Space, and Technology Committee.

The measure is endorsed by Girl Scouts of the USA, Save the Children Action Network, the American Association of University Women, the National Alliance for Partnerships in Equity, and the National Organization for Women, among several other national organizations.