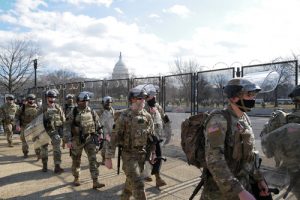 The National Guard would be fully reimbursed $521 million for securing the U.S. Capitol and surrounding grounds following the Jan. 6 insurrection under legislation introduced by U.S. Reps. Steve Womack (R-AR) and Ken Calvert (R-CA).

Without such authorized supplemental emergency funding, the National Guard would be forced to cancel trainings, in turn negatively impacting readiness and operations, according to the lawmakers, who were joined in offering the bill by every Republican member of the U.S. House Appropriations Defense Subcommittee and other House Republican appropriators, including U.S. Reps. Tom Cole (R-OK), Mark Amodei (R-NV), Dan Newhouse (R-WA), Dave Joyce (R-OH), Kay Granger (R-TX), and John Moolenaar (R-MI).

“This bill is a simple solution to a problem that shouldn’t exist,” Rep. Womack said. “Instead of partisan bickering and bloated spending packages that do not meet the definition of ‘emergency,’ it’s time for Congress to do its most basic duty and provide our men and women in uniform with the funding they are owed.”

Specifically, Rep. Womack on July 16 sponsored H.R. 4498 with 15 original cosponsors. The bill currently has a total of 28 Republican cosponsors.

“In America’s times of great need, National Guard members are there to respond to our emergencies and disasters,” said Rep. Calvert, the lead original cosponsor of H.R. 4498. “It is essential that Congress act in a quick and bipartisan fashion to ensure the Guard has the resources it needs to fulfill its critical mission. Our legislation avoids any partisan or unrelated issues and simply provides the funding the Guard needs so that training will not be impacted.”

If not provided the funding by Aug. 1, the National Guard estimates that its readiness capabilities would decrease by 15 percent to 20 percent, with many units forced to cancel annual training and individual duty training assemblies; halt training site and armory upgrades; cease some flying operations; suspend training vehicle movement and maintenance; and deny Guard members the ability to obtain the necessary service time to receive credit for a full duty year.

H.R. 4498 would prevent this shortfall by appropriating the $521 million owed to the Guard for its deployment, according to the lawmakers.