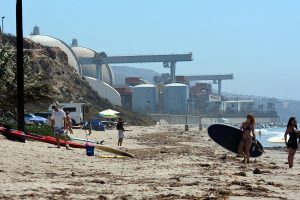 “It’s long past time for the federal government to keep its 35-year-old promise to taxpayers, ratepayers and communities across the country to permanently dispose of spent nuclear fuel and defense waste,” the congressmen said. “The Nuclear Waste Policy Amendments Act is a commonsense step in that direction.”

The bipartisan H.R. 3053, which Rep. Shimkus introduced on June 26, 2017, would amend the Nuclear Waste Policy Act (NWPA) of 1982 to direct the U.S. Department of Energy (DOE) to initiate a program to consolidate and temporarily store commercial spent nuclear fuel during the development, construction and operation of a permanent nuclear waste repository, according to the congressional record summary. U.S. Reps. Debbie Dingell (D-MI), Jerry McNerney (D-CA) and Gene Green (D-TX) were among the cosponsors of the bill.

In 1987, Yucca Mountain in Nevada was named as that site and DOE had confirmed the science behind that decision in 1994, Rep. Shimkus has explained in numerous statements and several opinion pieces written for national newspapers. In 2002, Congress and then-President George W. Bush approved Yucca Mountain again, and in 2008, DOE filed a license application with the Nuclear Regulatory Commission (NRC) to build at Yucca Mountain. However, during the Obama administration, the NRC stopped its analysis of the pending application and DOE closed the underground mountain site in an action Rep. Shimkus called “a colossal waste of resources.”

The House-approved H.R. 3053 would address federal land withdrawal and related management issues, including the permanent removal of specific federal land for storage use by DOE, and limiting activities relating to developing a separate defense waste warehouse used for storing DOE’s high-level radioactive waste and spent nuclear fuel, among other provisions, according to the congressional record summary.

Spent nuclear fuel sits idle in 121 communities across 39 states because the nation lacks a permanent geologic repository to dispose of the waste, according to the Energy and Commerce Committee. Reps. Shimkus and Walden said they are committed to helping those communities by getting “the permanent storage facility up and running.”

For instance, according to Rep. Walden in a speech on the House floor prior to the vote on H.R. 3053, the legislation would be important for cleanup efforts at places like the Hanford Site, a decommissioned nuclear production complex in Washington State.

“The Department of Energy’s Hanford Site, just up the mighty Columbia River from where I live and where I grew up, helped us win World War II and the site’s nuclear program was instrumental in projecting peace through strength throughout the Cold War. While the community has been a constructive partner in support of our vital national security missions, it did not agree to serve as a perpetual storage site for the resulting nuclear waste,” Rep. Walden said.

The Hanford site is housing 56 million gallons of toxic waste in decades-old metal tanks, he said. “The amount of waste stored at Hanford could fill the entire House Chamber 20 times,” said Rep. Walden, who added that DOE has reported that 67 of the tanks there “are assumed or are known to have leaked waste into the soil. There is an understandable sense of urgency behind the cleanup efforts under way at Hanford.”

U.S. Rep. Leonard Lance (R-NJ), who also serves on the Energy and Commerce Committee and helped secure passage of H.R. 3053, said the bill will move the nation’s more than 80,000 metric tons of spent nuclear fuel — including 3,000 metric tons stored on-site in New Jersey — to secure temporary sites in New Mexico and Texas while the permanent national repository is established at Yucca Mountain.

“I want the 3,000 metric tons of nuclear waste out of New Jersey and consolidated at a national, permanent facility,” said Rep. Lance, one of the 109 cosponsors of H.R. 3053. “For far too long the federal government has failed to meet its obligation to dispose of used fuel that resides at nuclear plants across 39 states.”

For instance, New Jersey gets roughly 50 percent of its electricity from four nuclear reactors at three generating stations and is one of the nation’s top contributors to securely dispose of the nuclear waste, he said. “New Jersey ratepayers have contributed nearly $2 billion to the U.S. Department of Energy’s Nuclear Waste Fund to dispose of nuclear waste at the permanent repository at Yucca Mountain,” said Rep. Lance. “Garden State taxpayers deserve their return on that investment.”

According to a one-page summary of H.R. 3053 from the Energy and Commerce Committee, the NWPA had set a 1998 deadline for the U.S. government to take title to the nation’s spent nuclear fuel for disposal, but DOE missed the deadline. Consequently, American taxpayers now are liable for more than $34 billion in payments to nuclear utilities, an amount that keeps accumulating yearly, according to the committee, which added that the payments are made from an unlimited U.S. Department of Justice account that is not subject to annual appropriations or budget caps.

U.S. Rep. Mimi Walters (R-CA) said passage of H.R. 3053 would protect ratepayers by reforming the “fee for service” model under which funds were collected to finance a permanent disposal program.

“At the decommissioned San Onofre Nuclear Generating Station just south of my district, 1,800 tons of spent nuclear fuel sits along the Pacific coastline,” Rep. Walters said in House floor remarks. “This spent nuclear fuel must be moved for safety and environmental reasons, but also out of fairness to American ratepayers,” said Rep. Walters.

To date, she said, California ratepayers have contributed more than $2 billion to the Nuclear Waste Fund thinking those funds would establish a permanent storage facility that hasn’t yet happened. “Mr. Speaker, I speak on behalf of my constituents, who say the time to fix this problem is now,” Rep. Walters said.