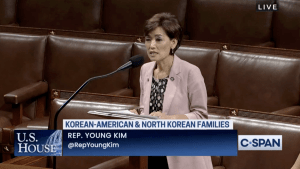 Two bipartisan initiatives introduced by U.S. Rep. Young Kim (R-CA) to encourage family reunifications between Korean Americans and their war-torn loved ones in North Korea received approval earlier this week from the U.S. House of Representatives.

“I thank my House colleagues for showing bipartisan commitment to divided family reunifications today, and I urge the Senate to follow suit and take action,” Rep. Kim said on Tuesday.

With an estimated 100,000 Korean Americans having family members in North Korea whom they have not seen or heard from in more than 60 years, Rep. Kim said “time is running out” to reunite them.

“The United States must make this an urgent priority before it is too late,” said Rep. Kim. “As a Korean American, this issue is personal to me, and I have deep empathy for those longing to reunite with their relatives.”

H.Res. 294 would call on the United States and North Korea to begin the process of reuniting Korean Americans with their immediate relatives in North Korea, according to the congressional record summary, which says that many families were divided after the signing of the Korean War Armistice Agreement that divided the Korean Peninsula into North and South Korea.

The Korean American Grassroots Conference and Divided Families USA thanked Rep. Kim for her support of both measures.