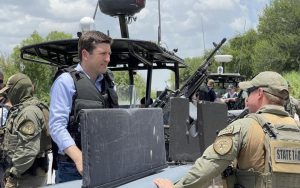 U.S. Rep. Bryan Steil (R-WI), ranking member of the U.S. House Select Committee on Economic Disparity and Fairness in Growth, on June 17 joined some of his committee colleagues on a trip to Texas’ Rio Grande Valley where they conducted a field hearing entitled, “Infrastructure Investment: Building Economic Resilience in South Texas.”

“I am glad we had a full congressional hearing with Democrats and Republicans at the southern border where we could see first-hand the challenges American cities have due to the open border,” said Rep. Steil during a press conference afterwards. “The inaction by President Biden and his administration has created a crisis at our southern border.”

During the hearing, the bipartisan congressional delegation heard directly from local leaders, community members and experts about the challenges Texas faces building and accessing the modern infrastructure necessary to grow the local economy and benefit the full community, according to a committee statement.

The lawmakers also had an opportunity to gain first-hand insight about the implications of outdated infrastructure on working-class communities and its impact on economic mobility, the statement says.

Following the committee’s hearing, Republican members participated in a tour of the southern border hosted by the Texas Department of Public Safety. Rep. Steil and his colleagues then held a press conference to discuss the impacts of the Biden administration’s policies at the border, including the increase in human trafficking and fentanyl coming across the border, and the resources needed to secure the border and protect communities, according to the congressman’s staff.

“Resources to make critical infrastructure investment discussed during the hearing and to protect Texas communities have been diverted to manage” the crisis at the border, Rep. Steil said during the GOP press conference. “Farmers, ranchers and families are seeing this first-hand.”

For example, he said, there has been an increase in high-speed car chases, which have forced schools to put up barricades to protect students.

“The needs of farmers and ranchers have been routinely ignored and demeaned by the Biden administration’s inaction,” said Rep. Steil. “Human and drug trafficking on personal property is harming Texans’ safety and destroying farmland. We cannot continue to ignore this crisis. The federal government has a duty to secure our border. It’s time for President Biden and one-party control in Washington to act.”