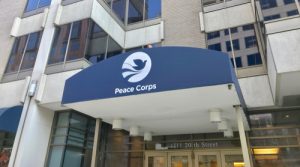 Bipartisan, bicameral legislation introduced by U.S. Sen. Rob Portman (R-OH) to reauthorize the Peace Corps commemorative project before it expires this month became law on Jan. 5 with the president’s signature.

“I applaud President Trump for signing this important legislation into law,” Sen. Portman said on Wednesday.

U.S. Reps. Joseph Kennedy III (D-MA) and Garret Graves (R-LA) introduced the identical H.R. 7460 in their chamber. The measure in December 2020 received approval from both houses of Congress before it was signed into law, ensuring that the project is able to secure the necessary design approvals and raise the funding for construction.

The newly signed law extends the authorization for the commemorative project for an additional seven years.

“For more than 50 years, the Peace Corps has served as a powerful vehicle for volunteers who wish to use their talents to carry America’s humanitarian values to other parts of the world,” said Sen. Portman. “By reauthorizing this project, we can ensure the Peace Corps Commemorative Foundation can finish this important project and honor those Americans who have donated their time and talent to serving others.”

“The tremendous work of the Peace Corps Commemorative Foundation will now be able to continue without interruption, and we look forward to continued progress leading to groundbreaking,” Blumhorst said.