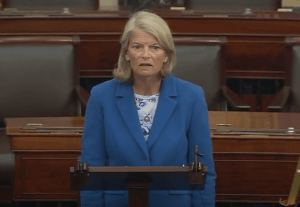 U.S. Sen. Lisa Murkowski (R-AK) on June 8 sponsored a bipartisan bill that would establish a nationwide campaign to raise awareness about the lethality of fentanyl and fentanyl-contaminated drugs.

“We cannot stand idly by and allow the fentanyl epidemic to wreak havoc on individuals, families and communities across our state,” Sen. Murkowski said Wednesday from the U.S. Senate floor. “We have an opportunity to help change that through this legislation.”

Bruce’s Law, S. 4358, which has three original cosponsors, including U.S. Sen. Dianne Feinstein (D-CA), also would establish a federal interagency work group on fentanyl contamination of illegal drugs, and would provide community-based coalition enhancement grants to mitigate the effects of drug misuse, according to the text of the bill.

The Senate bill is named for Robert “Bruce” Snodgrass, 22, of Alaska, who died from a fentanyl overdose in 2021.

“The passing of Bruce Snodgrass was heartbreaking and all too familiar,” said Sen. Murkowski. “I continue to read headline after headline in our local press — and directly from Alaskans who are impacted — about the fentanyl crisis intensifying. We also know that we’re not alone, that this is a national crisis, and that we need to do more.

“I thank advocates like Sandy Snodgrass and all of the individuals who helped us craft this bill, and urge my colleagues to swiftly take up and pass it,” the senator said.

If enacted, S. 4358 would authorize the U.S. Department of Health and Human Services (HHS) to launch a public education and awareness campaign focused on the dangers of drugs that could be contaminated with fentanyl, drug prevention, and detection of early warning signs of addiction among youth, according to a bill summary provided by Sen. Murkowski’s staff.

Additionally, S. 4358 would authorize the HHS Secretary to establish the federal interagency working group to consult with experts — including family members, youth and individuals working toward recovery — to help improve responses to the incidence of drug overdose by fentanyl-contaminated drugs; to study federal efforts to prevent and minimize drug overdose by fentanyl-contaminated drugs; and to recommend better education on the issue for school-aged children and youth, the summary says.

Bruce’s Law, which is endorsed by both the National HIDTA Directors Association and the Community Anti-Drug Coalitions of America, has been referred to the U.S. Senate Health, Education, Labor, and Pensions Committee for consideration.