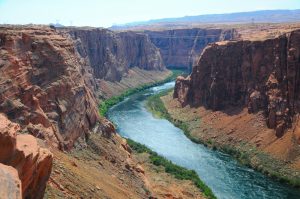 U.S. Sen. Martha McSally (R-AZ) led a bipartisan and bicameral effort by lawmakers in seven states to secure passage of a historic drought contingency plan for the Colorado River, an effort that culminated in legislation being signed into law by President Donald Trump on April 16.

“The Colorado River is the lifeblood of the southwestern United States. The river provides drinking water to 40 million Americans, irrigation to 5.5 million acres of farmland, and more than 4,000 megawatts of carbon-free hydropower to communities across the West in seven states,” Sen. McSally said on the Senate floor. “Unfortunately, the last 19 years have been the Colorado basin’s driest on record. This long and intense drought has left the combined water stored behind Lake Powell and Lake Mead at critically low levels.”

The drought contingency plan (DCP) is designed to protect the lakes from reaching certain critical water elevations that would trigger severe water supply and hydropower impacts, McSally explained, including the risk of reaching crisis levels where operational control of the Colorado River system would be lost.

“The passage of the DCP authorization … showcases how Congress should work: a large, bipartisan effort where we all sprang into action to deliver real results for Arizonans and the American people,” Sen. McSally said in a written statement.

“However, in the face of long term drought, the basin states have come together to create coordinated plans that should aid efforts to prevent severe water shortages in the West and stabilize water storage levels at Lake Mead and Lake Powell,” Sen. Gardner said.

“Securing our water future is one of the most important issues we face,” added Arizona Gov. Doug Ducey, who praised Sen. McSally and Rep. Grijalva for their leadership in prioritizing the issue.