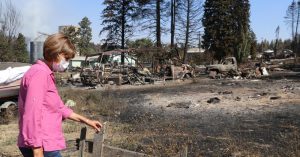 U.S. Rep. Cathy McMorris Rodgers (R-WA) on June 15 sponsored legislation to ensure that a declaration for a major disaster or emergency is made on a timely basis so that rural areas quickly receive federal assistance.

Rep. McMorris Rodgers introduced the Making Aid for Local Disasters Equal Now (MALDEN) Act, H.R. 3917, with lead original cosponsor U.S. Rep. Dan Newhouse (R-WA). The bill is named after the town of Malden, Wash., which was devastated by the Babb Road Fire in 2020.

“The moment after I laid eyes on the damage, I went to work advocating for federal assistance to be sent to Malden and other towns in Whitman County to help with the recovery efforts,” Rep. McMorris Rodgers said. “Unfortunately, far too often, rural communities are at a disadvantage in getting the disaster assistance that they desperately need. This bill will help fix that.”

H.R. 3917 would require the United States president to approve or deny a disaster declaration request within 30 days. If the request is not denied within 30 days, then it would be automatically approved, according to the text of the bill.

Additionally, the legislation would require the Federal Emergency Management Agency (FEMA) to coordinate with state leadership on guidance for local emergency managers on developing a recovery team. FEMA also must assist in identifying short and long-term recovery resources, including resources to prevent secondary natural disasters like flooding, mudslides and rockslides, the bill says.

If a request for individual assistance would be denied, the bill also would require FEMA to work with each state emergency management agency to make disaster case workers available for rural communities, according to the bill’s text.

“The Town of Malden lends its unequivocal and strong support for the MALDEN Act sponsored by Congresswoman Cathy McMorris Rodgers,” said Malden Mayor Dan Harwood. “Had such a provision been in place prior to September 7, 2020, the lives of our area residents would be much improved today, as would our town’s recovery efforts.”