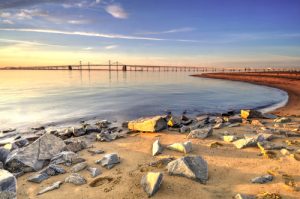 U.S. Sen. Shelley Moore Capito (R-WV) applauded recent action by the U.S. Fish and Wildlife Service that will implement a new law she introduced to support habitat restoration in the Chesapeake Bay, the largest estuary in the United States.

Sen. Capito in September 2019 cosponsored the bipartisan Chesapeake Watershed Investments for Landscape Defense (WILD) Act with bill sponsor U.S. Sen. Chris Van Hollen (D-MD) to require the U.S. Fish and Wildlife Service (USFWS) to establish the Chesapeake Watershed Investments for Landscape Defense program. Among other duties, the program must establish and carry out a grant and technical assistance program to restore and protect habitat for fish and wildlife in the Chesapeake Bay watershed, according to the text of the bill.

Sen. Capito’s measure was signed into law in October 2020 as part of the larger America’s Conservation Enhancement Act, and authorized creation of the new grant program with $15 million in federal funding.

On Sept. 2, the USFWS released a framework for achieving the goals of Sen. Capito’s bill by building upon existing conservation partnerships, priorities and plans in the Chesapeake Bay watershed, which connects six states and the District of Columbia.

Entitled “Chesapeake WILD: A network in action for wildlife conservation and environmental equity,” the USFWS said the framework provides a vision for collaborative conservation that emphasizes diversity, equity, inclusion, and justice practices and policies, as well as accessibility. The framework is organized around five focal areas: Fish and Wildlife Habitats, Climate Change, Community Partnership, Public Access, and Water Quality, according to the document.

“The framework laid out by the USFWS is a critical guide in protecting vital ecosystems in the Chesapeake Bay watershed by implementing the Chesapeake WILD Act,” Sen. Capito said on Sept. 3. “By tailoring wildlife conservation grants specifically to this region, we’re better able to support the unique needs of watershed species and in turn advance the West Virginia outdoor industry by preserving sustainable populations of key species of interest to our sportsmen.”

According to the senator’s office, there are key areas in the tidal Chesapeake Bay system that will benefit from the new USFWS grant program, including areas for wetland restoration.