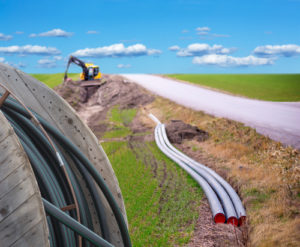 Additionally, as many as 74 percent of West Virginia residents in rural areas don’t have access to such services, according to the FCC’s Feb. 19 draft report.

Sen. Capito, co-chair of the Senate Broadband Caucus, thinks it’s critical that such new and innovative opportunities be made available to all residents in West Virginia.

“In the ever-evolving global economy, our ability to compete depends on our capacity to adapt,” said Sen. Capito, who is committed to bringing high-speed broadband to West Virginia.

The FCC draft report says that the digital divide between Americans with and without access to modern broadband networks has narrowed substantially, but it also says that the number of people lacking access to a fixed broadband connection that meets the FCC’s benchmark speeds has decreased 25 percent, from more than 26 million people in 2016 to 19.4 million in 2017.

Additionally, the FCC’s draft says that the majority of Americans gaining access to high-speed connections, which totals roughly 5.6 million people, live in rural parts of the United States where broadband deployment has traditionally lagged.

FCC Chairman Ajit Pai said last week that closing the digital divide has been a top FCC priority for the last two years and added that the “report shows that our approach is working.” But Pai acknowledged that the FCC “won’t rest until all Americans can have access to broadband and the 21stcentury opportunities it provides to communities everywhere.”

The FCC’s draft report concludes that advanced broadband services are being deployed on a reasonable and timely basis and added that the commission will vote on the draft report in the coming weeks.

In May 2015, Sen. Capito introduced the Capito Connect Plan, which outlined three steps to increase broadband access in her home state.

For instance, by listening to what the state’s local communities need, the senator said a West Virginia-specific plan could be developed for achieving wider broadband access.

The other two steps in the lawmaker’s plan are to foster collaboration between private, local, state and federal agencies and organizations to eliminate duplicate and outdated programs, and to promote economic growth through broadband innovation.

“Through innovative thinking and implementation, West Virginia will achieve the connectivity that will help boost our economy,” said Sen. Capito.

The lawmaker also this month praised a newly announced collaboration in which West Virginia is among several states chosen to work with the National Telecommunications and Information Administration (NTIA) to identify national broadband data that will be used to create a map displaying nationwide broadband availability.

Sen. Capito on Feb. 12 called it “another positive step” in closing the digital divide in rural areas.

“Accurate availability maps are absolutely crucial for informed decision-making and West Virginia will undoubtedly benefit from being a key player in this process to expand access,” Sen. Capito said. “I’m glad to see our efforts to deliver NTIA the resources to move forward with important projects like this one are paying off and I will continue working through my Capito Connect Program to make even more progress in better connecting our communities.”

NTIA, a federal agency operating under the U.S. Department of Commerce, focuses on expanding broadband internet adoption and access, among other duties.